The research was divided in two fronts: Competitive (other apps for kegs and their on-screen experience) and observational (observing people using the current iced-coffee keg).

In our competitive research, we discovered an Andriod app that tracked the level of beer kegs. The user interface used lists and icons to show the different keg levels and types of beer. We found many others that did a variation of the tracking. We couldn’t find an app that could do everything we were looking to do: track the level of liquid in the kegs, control the flow, and keep a record of consumer visits.

We found that, depending on the cup size, the users took between 5-7 seconds to fill a cup of iced coffee.

In our observational research, we found that the keg was not restricted, so anyone could walk up to the keg and get some cold brew coffee. We found that, depending on the cup size, the users took between 5-7 seconds to fill a cup of iced coffee. There was also variation with how hard the user would pull the lever and the amount of gas pushing the liquid up. We also found that some users wanted to ‘top-off’ their cups, adding between 1-3 seconds to the initial count.

Knowing the user behavior, provided me with the opportunity to understand how the device will interact with users. I envisioned an experience that would feel seamless to the user, almost as if the controlling device was not there. The device would use a ball valve to control the flow of the liquid, an RFID reader to track the users, and a database to store the different visits to the coffee keg.

One screen to tie it all up

The user interaction with the device will have to touch points. One, when the user taps their RFID card, and two, when they pull the lever. Between those two touch points we decided to add a screen to give visual feedback to the user. The screen also gave us the opportunity to inform the user of the type of coffee being served as well as the level left in the keg.

Our goal was to design an experience on the screen with as few steps as possible, so the device would be ready to use almost instantly between each visit to the keg. Once the ID tag is tapped on the RFID reader, access is granted or denied and you can get your coffee. 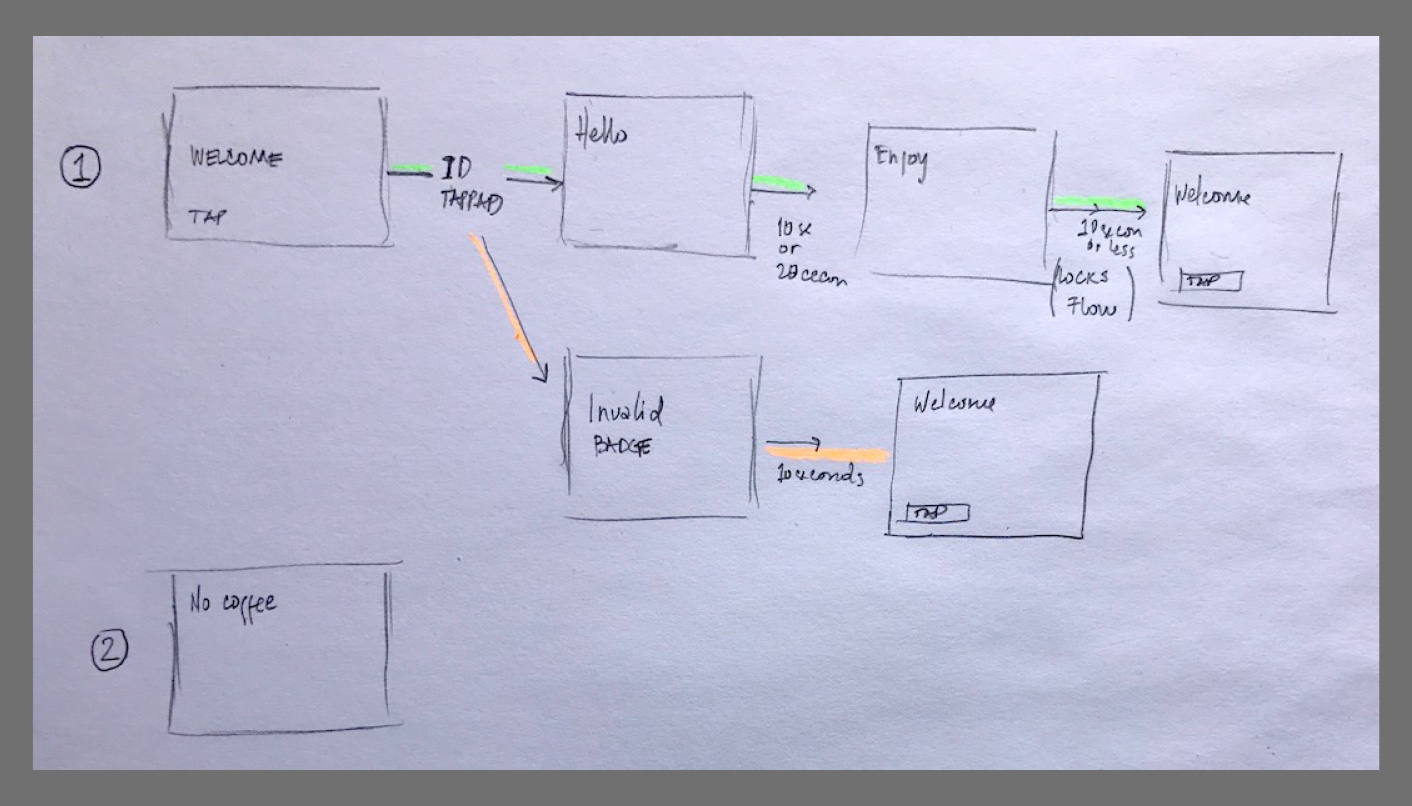 The welcome screen displays the type of coffee that is currently in the keg and an invitation to the user to ‘please tap badge’. Once granted access, it displays the name of the user and a timer. This timer has two uses, first, it will inform the user that the app and device are running — that has not crashed. Second, it shows that in a certain amount of time the device will lock again, and no more coffee will flow from the keg. 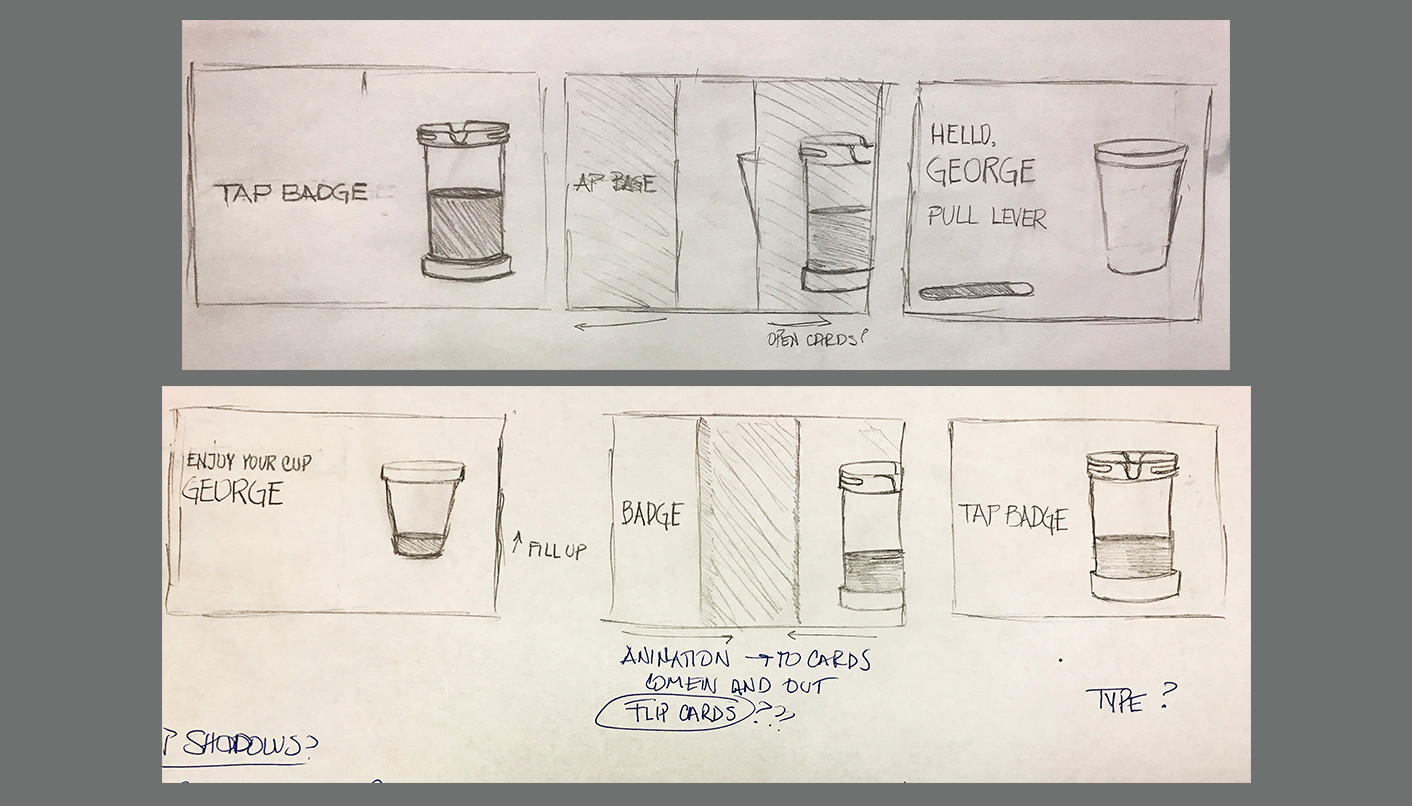 For the hi-def proof of concept I followed Microsoft's design system, using their colors and typography. But, I also had a little fun with the keg illustration that displays the level of coffee in the keg.

In order to facilitate the use of the app, I designed an administrator platform that shows different information that the app is tracking, such as visits, how long the keg would last, and people who got coffee. It also has an option to input or change the type of coffee in the keg that displays in the welcome screen. 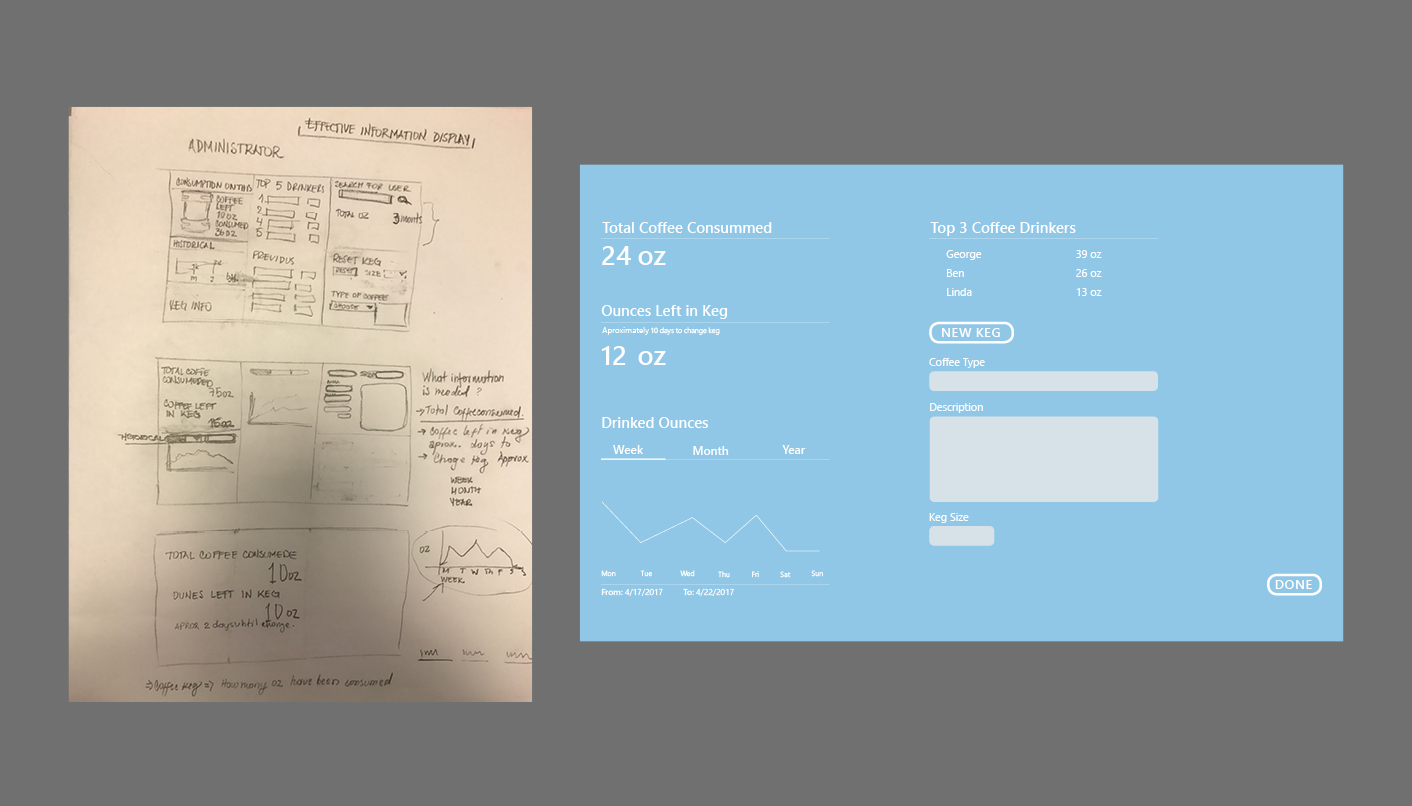 We delivered a working prototype that controlled and tracked the flow of liquid. It did so, by opening and closing a ball valve, to control the flow. Receiving information from an RFID reader. All of the above was possible with Raspberry Pi running Windows IOT.